In this section, we categorize police uses of face recognition according to the risks that they create for privacy, civil liberties, and civil rights. Some uses of the technology create new and sensitive risks that may undermine longstanding, legally recognized rights. Other uses are far less controversial and are directly comparable to longstanding police practices. Any regulatory scheme should account for those differences.

The overall risk level of a particular deployment of face recognition will depend on a variety of factors. As this report will explain, it is unclear how the Supreme Court would interpret the Fourth Amendment or First Amendment to apply to law enforcement face recognition; there are no decisions that directly answer these questions.29 In the absence of clear guidance, we can look at general Fourth Amendment and First Amendment principles, social norms, and police practices to identify five risk factors for face recognition. When applied, these factors will suggest different regulatory approaches for different uses of the technology.

At its core, the Fourth Amendment was intended to prevent generalized, suspicionless searches. The Fourth Amendment was inspired by the British Crown’s use of general warrants, also known as Writs of Assistance, that entitled officials to search the homes of any colonial resident.30 This is why the Amendment requires that warrants be issued only upon a showing of probable cause and a particularized description of who or what will be searched or seized.31

For its part, the First Amendment does not protect only our right to free speech. It also protects our right to peaceably assemble, to petition our government for a redress of grievances, and to express ourselves anonymously.32 These rights are not total and the cases interpreting them are at times contradictory.33 But police use of face recognition to continuously identify anyone on the street—without individualized suspicion—could chill our basic freedoms of expression and association, particularly when face recognition is used at political protests.

Government searches against dragnet databases have been among the most controversial national security and law enforcement policies of the 21st century. Public protest after Edward Snowden’s leaks of classified documents centered on the NSA’s collection of most domestic call records in the U.S. Notably, searches of the data collected were more or less targeted; the call records database was not.34 In 2015, Congress voted to end the program.35

While they may stem from legitimate law enforcement necessity, secret searches merit greater scrutiny than public, transparent searches. “It should be obvious that those government searches that proceed in secret have a greater need for judicial intervention and approval than those that do not,” writes Professor Susan Freiwald. As she explains, “[i]nvestigative methods that operate out in the open may be challenged at the time of the search by those who observe it.” You can’t challenge a search that you don’t know about.36

Courts have generally applied greater scrutiny—and required either a higher level of individualized suspicion, greater oversight, or both—to searches that track real-time, contemporaneous behavior, as opposed to past conduct. For example, while there is a split in the federal courts as to whether police need probable cause to obtain historical geolocation records, most courts have required warrants for real-time police tracking.37 Similarly, while federal law enforcement officers obtain warrants prior to requesting real-time GPS tracking of a suspect’s phone by a wireless carrier, and prior to using a “Stingray” (also known as a cell-site simulator) which effectively conducts a real-time geolocation search, courts have generally not extended that standard to requests for historical geolocation records.38

In 1892, Sir Francis Galton published Finger Prints, a seminal treatise arguing that fingerprints were “an incomparably surer criterion of identity than any other bodily feature.”39 Since then, law enforcement agencies have adopted fingerprint technology for everyday use. A comparable shift occurred in the late 20th Century around forensic DNA analysis. Regulation of face recognition should take note of the existing ways in which biometric technologies are used by American law enforcement.

At the same time, we should not put precedent on a pedestal. As Justice Scalia noted in his dissent in Maryland v. King, a case that explored the use of biometrics in modern policing, “[t]he great expansion in fingerprinting came before the modern era of Fourth Amendment jurisprudence, and so [the Supreme Court was] never asked to decide the legitimacy of the practice.”40 A specific use of biometrics may be old, but that doesn’t mean it’s legal.

Applying these criteria to the most common police uses of face recognition, three categories of deployments begin to emerge:

These categories are summarized in Figure 4 and explained below. Note that not every criterion maps neatly onto a particular deployment. 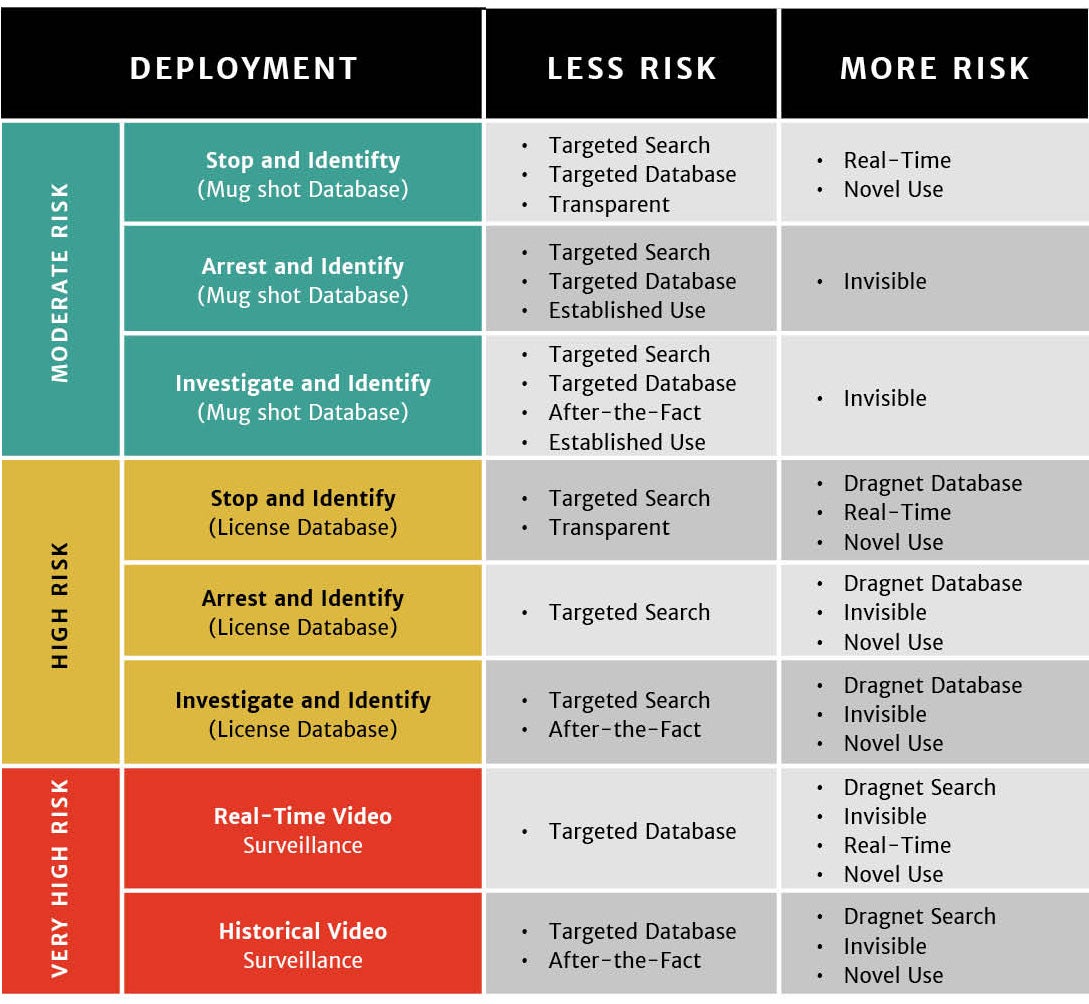 The primary characteristic of moderate risk deployments is the combination of a targeted search with a relatively targeted database.

Mug shot databases are not entirely “targeted.” They’re not limited to individuals charged with felonies or other serious crimes, and many of them include people like Chris Wilson—people who had charges dismissed or dropped, who were never charged in the first place, or who were found innocent of those charges. In the FBI face recognition database (NGI-IPS), for example, over half of all arrest records fail to indicate a final disposition.41 The failure of mug shot databases to separate the innocent from the guilty—and their inclusion of people arrested for peaceful, civil disobedience—are serious problems that must be addressed. That said, systems that search against mug shots are unquestionably more targeted than systems that search against a state driver’s license and ID photo database.

Two of the three moderate risk deployments—while invisible to the search subject—mirror longstanding police practices. The enrollment and search of mug shots in face recognition databases (Arrest and Identify) parallels the decades-old practice of fingerprinting arrestees during booking. Similarly, using face recognition to compare the face of a bank robber—captured by a security camera—to a database of mug shots (Investigate and Identify) is clearly comparable to the analysis of latent fingerprints at crime scenes.

High risk deployments are quite similar to moderate risk deployments—except for the databases that they employ. When police or the FBI run face recognition searches against the photos of every driver in a state, they create a virtual line-up of millions of law-abiding Americans—and cross a line that American law enforcement has generally avoided.

Law enforcement officials emphasize that they are merely searching driver’s license photos that people have voluntarily chosen to provide to state government. “Driving is a privilege,” said Sheriff Gualtieri of the Pinellas County Sheriff’s Office.45

That surprise matters: A founding principle of American privacy law is that government data systems should notify people about how their personal information will be used, and that personal data should not be used outside of the “stated purposes of the [government data] system] as reasonably understood by the individual, unless the informed consent of the individual has been explicitly obtained.”46

Historically, law enforcement biometric databases have been populated exclusively or primarily by criminal or forensic samples. By federal law, the FBI’s national DNA database, also known as the National DNA Index System, or “NDIS,” is almost exclusively composed of DNA profiles related to criminal arrests or forensic investigations.47 Over time, the FBI’s fingerprint database has come to include non-criminal records—including the fingerprints of immigrants and civil servants. However, as Figure 5 shows, even when one considers the addition of non-criminal fingerprint submissions, the latest figures available suggest that the fingerprints held by the FBI are still primarily drawn from arrestees.

The FBI face recognition unit (FACE Services) shatters this trend. By searching 16 states’ driver’s license databases, American passport photos, and photos from visa applications, the FBI has created a network of databases that is overwhelmingly made up of non-criminal entries. Never before has federal law enforcement created a biometric database—or network of databases—that is primarily made up of law-abiding Americans. Police departments should carefully weigh whether they, too, should cross this threshold.48 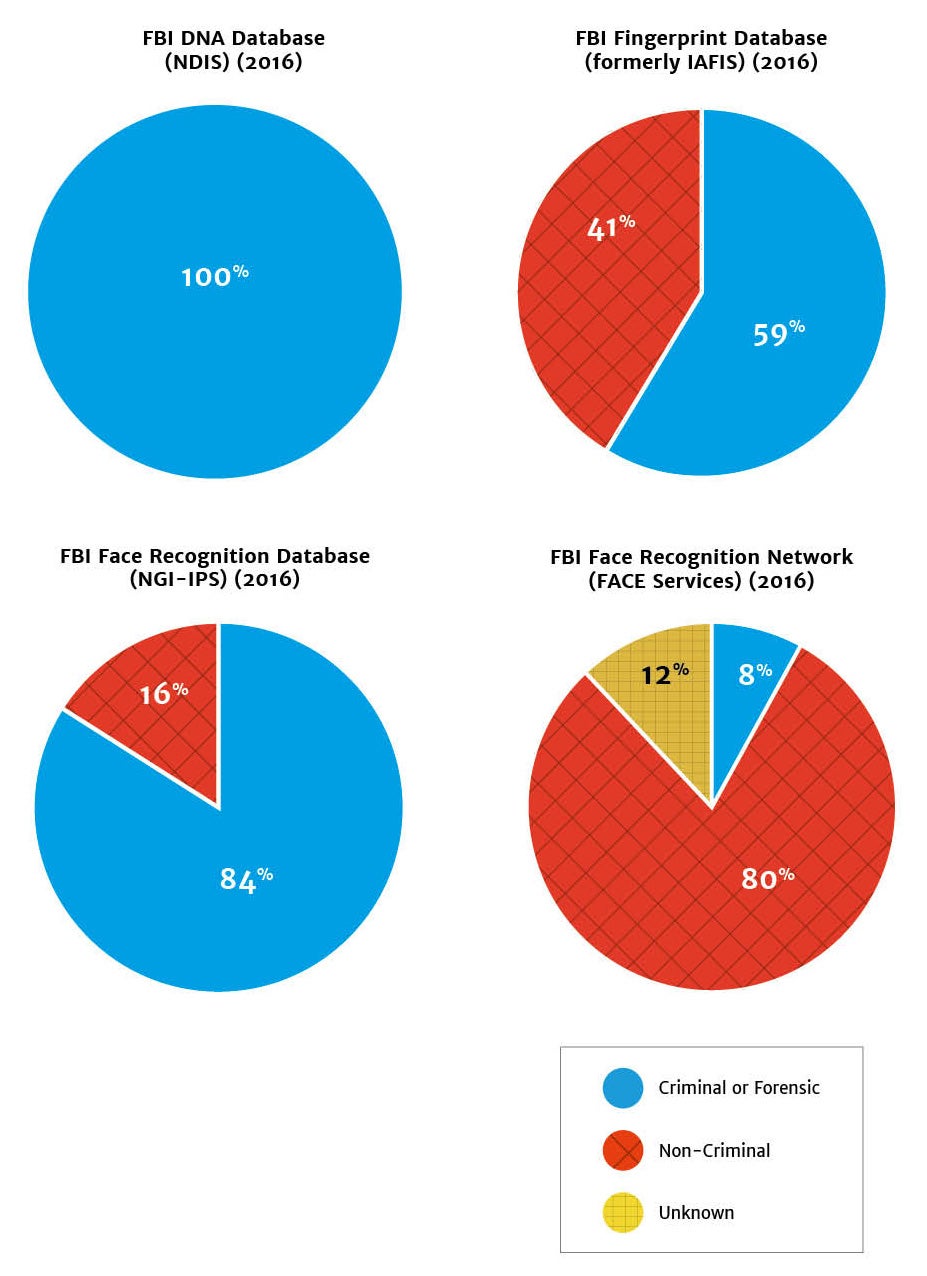 Real-time face recognition marks a radical change in American policing—and American conceptions of freedom. With the unfortunate exception of inner-city black communities—where suspicionless police stops are all too common50—most Americans have always been able to walk down the street knowing that police officers will not stop them and demand identification. Real-time, continuous video surveillance changes that. And it does so by making those identifications secret, remote, and potentially pervasive. What’s more, as this report explains, real-time identifications may also be significantly less accurate than identifications in more controlled settings (i.e. Stop and Identify, Arrest and Identify).51

In a city equipped with real-time face recognition, every person who walks by a street surveillance camera—or a police-worn body camera—may have her face searched against a watchlist. Right now, technology likely limits those watchlists to a small number of individuals. Future technology will not have such limits, allowing real-time searches to be run against larger databases of mug shots or even driver’s license photos.52

There is no current analog—in technology or in biometrics—for the kind of surveillance that pervasive, video-based face recognition can provide. Most police geolocation tracking technology tracks a single device, requesting the records for a particular cell phone from a wireless company, or installing a GPS tracking device on a particular car. Exceptions to that trend—like the use of cell-tower “data dumps” and cell-site simulators—generally require either a particularized request to a wireless carrier or the purchase of a special, purpose-built device (i.e., a Stingray). A major city like Chicago may own a handful of Stingrays. It reportedly has access to 10,000 surveillance cameras.53 If cities like Chicago equip their full camera networks with face recognition, they will be able to track someone’s movements retroactively or in real-time, in secret, and by using technology that is not covered by the warrant requirements of existing state geolocation privacy laws.54