J. Edgar Hoover kept track of his opponents. Hoover’s FBI conducted surveillance on Martin Luther King, Jr., Fannie Lou Hamer, Cesar Chavez, Marcus Garvey, and many other civil rights leaders.146 Public protests were seen as a threat. FBI agents, disguised as freelance photographers, were sent to photograph them. According to a candid memoir from an FBI undercover photographer, Richard Coffman:

Following Martin Luther K.’s ‘I Have a Dream Speech’ it was discovered that some of our ‘Most Wanted’ and several subjects of our Domestic Security investigations liked to participate or show up at the various demonstrations. Many of them mostly attracted by the anonymity, opportunity of free drugs and easy available sex. On some of the really large demonstrations I would recruit a dozen or so fellow Agents, instruct them how to not look like FBI Agents and how to mingle among the ‘Hippies’ and other protest types and see and report what was going on.147

Coffman took special interest in surreptitious photographs of interracial couples and nude or partially nude female protesters, which he shared with other law enforcement officials.148

Today’s FBI is a different place. In training, every FBI agent learns about the agency’s surveillance of Dr. King.149 But the specter of political surveillance survives. In a 2012 Senate hearing, Senator Al Franken, then Chairman of the Senate Subcommittee on Privacy, Technology and the Law, confronted the FBI about an agency PowerPoint presentation showing how face recognition could be used to identify people attending the 2008 presidential campaign rallies for then-senators Barack Obama and Hillary Clinton.150 In 2015, the FBI admitted that it conducted surveillance flights over Ferguson and Baltimore during protests of police use of force.151 The Department of Homeland Security has monitored Black Lives Matter protests.152 And footage of Chris Wilson’s protest shows an officer videotaping the event.153

What if every time an FBI special agent pointed his camera at a protester, the FBI could use face recognition to identify her? 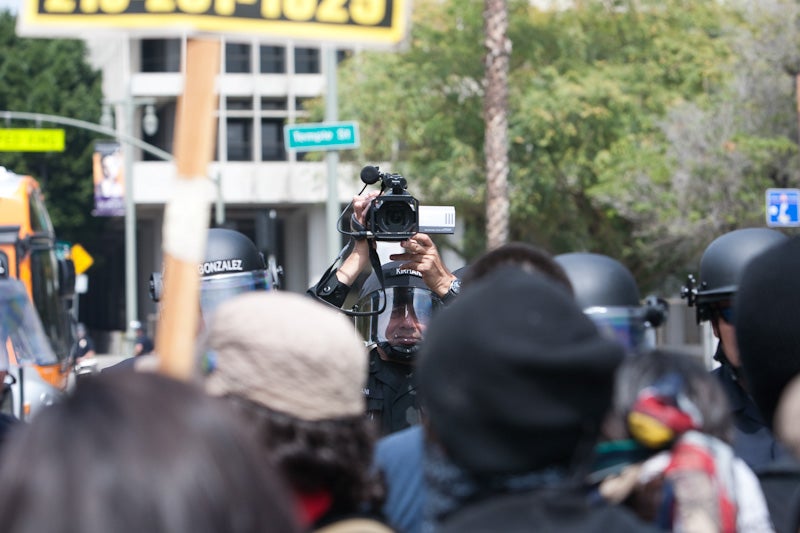 The First Amendment protects our freedom of speech and our right to “peaceably assemble" and to "petition the [g]overnment" for a redress of grievances. Unfortunately, the Supreme Court’s interpretation of the First Amendment may provide little protection against the use of face recognition to identify peaceful protesters. Despite the fact that leading law enforcement agencies—including the FBI and the Department of Homeland Security (DHS)—have explicitly recognized the potential chilling effect of face recognition on free speech, we found that almost none of the agencies using face recognition have adopted express prohibitions against using the technology to track political or other First Amendment activity.

a. The right to anonymous speech and association.

Face recognition, at its core, is a means of identification. In 1958, the Supreme Court held in NAACP v. Alabama that the NAACP could not be compelled by state law to disclose the identities—the names and addresses—of its members, on the grounds that disclosure would likely hinder the ability of those members collectively to advocate their beliefs.155 The Court noted that there existed a “vital relationship between freedom to associate and privacy in one’s associations,” particularly in instances where a group advocates minority or unpopular beliefs.156

Talley v. California in 1960, and McIntyre v. Ohio Elections Commission in 1995, reaffirmed the protection of anonymous speech. In Talley, the Court held that a law prohibiting the distribution of anonymous pamphlets violated the First Amendment. The Court reasoned that “[t]here can be no doubt that such an identification requirement would tend to restrict freedom to distribute information and thereby freedom of expression.”157 “Anonymity,” the Court said 35 years later in McIntyre, “is the shield from the tyranny of the majority.”158

b. The right of the police to investigate demonstrations.

The right to free speech and association does not amount to a right to be free from surveillance, however.159 In Laird v. Tatum in 1972, the Supreme Court considered whether military surveillance of public meetings and demonstrations had an “inhibiting effect” on the expression of First Amendment rights. The Court held that without a showing of past or immediate danger of direct injury, it does not. Since then, two lower federal courts have applied Tatum to permit police photography of public demonstrations.160

But there are limits to this doctrine. In Hassan v. City of New York, a 2015 case challenging the NYPD’s pervasive video, photographic, and undercover surveillance of Muslim Americans following 9/11,161 the Third Circuit agreed with the plaintiffs—the victims of surveillance—that the manner by which the program was administered—specifically targeting a group of people for their beliefs and religious affiliations—may have caused them “direct, ongoing, and immediate harm.”162

2. Legislators and police forces could fix this problem. They haven’t.

In the absence of clear protections afforded by the courts, it is critically important that legislators and police forces consider the implications of face recognition on free speech.

“Surveillance has the potential to make people feel extremely uncomfortable, cause people to alter their behavior, and lead to self-censorship and inhibition.”

Legislators have yet to step up to this task. As noted above, not a single state has passed legislation to comprehensively rein in face recognition—and none of the laws that have been passed address the specific risks that face recognition poses to free speech and expression. The federal Privacy Act generally prohibits the government from keeping records “describing how any individual exercises rights guaranteed by the First Amendment.”164 But the FBI is now petitioning for its face recognition system to be exempt from the enforcement of this provision.165

Major federal and state law enforcement agencies have recognized the threat that face recognition presents to free speech. A Privacy Impact Assessment drafted in 2011 by DHS, the FBI, and a number of state police agencies, considered the effects of law enforcement face recognition on the “erosion or compromise of anonymity.”166 The document recognizes that “surveillance has the potential to make people feel extremely uncomfortable, cause people to alter their behavior, and lead to self-censorship and inhibition.”167

To address this concern, the Assessment encourages that law enforcement use policies include express provisions “concerning the appropriate use of a facial recognition field identification tool in areas known to reflect an individual’s political, religious or social views, associations, or activities.”168 In such circumstances, “the collection of long range lens photographs should be limited to instances directly related to criminal conduct or activity.”169

We surveyed many of the state law enforcement agencies that helped write the Assessment.170 But only one agency that provided responsive records expressly addressed the use of face recognition on First Amendment activities in its face recognition use policy.171 Ohio’s newly implemented rule on face recognition states:

Given the potential chilling effect of face recognition on protected First Amendment activities, we award the highest score on free speech protections only to agencies that expressly address—and enumerate—activities that may chill free speech in a face recognition use policy, not just a general manual or procedural order.