The two district courthouses serving Cheltenham Township, Pennsylvania, adjudicate landlord-tenant disputes and municipal ordinance violations and also hold preliminary hearings and arraignments on more serious criminal charges.102 Several years ago, the Cheltenham Township Police Department stationed officers outside a courthouse parking lot to “perform counter-surveillance”—taking photos of people attending the court hearing of an alleged gang member. These photos were then run through Pennsylvania's face recognition system, which searches state mug shots and, beginning in 2012, all 34 million Pennsylvania driver’s license photos.103 We do not know if the photos were taken of suspected criminals—or if they were just people who happened to be in the courthouse parking lot.

This may seem unremarkable: Surreptitious police photography is an established policing technique. While the Fourth Amendment protects us against “unreasonable searches and seizures,” it is unclear whether face recognition constitutes a “search.” (See Sidebar 3.)

Protections from “unreasonable searches and seizures” can originate in any of the three branches of government: the judiciary, the legislature, or the executive, which includes law enforcement. Instead of allowing those protections to grow old and out of date, however, legislatures across the country are passing dozens of laws restricting the use of 21st century tracking technology to monitor public conduct. When legislators have hesitated, state and federal courts have stepped in and interpreted the Fourth Amendment to require warrants and other protections.

Unfortunately, courts and legislatures by and large have not applied these protections to face recognition technology. In the absence of guidance from legislatures and courts, police departments have created systems that often fall short of the protections offered against other tracking technology.

Before 1967, the Supreme Court generally adhered to a property-based view of the Fourth Amendment. Judges’ rulings on whether or not a Fourth Amendment “search” occurred largely turned on the existence of trespass.104 In 1967, however, the Court declared in Katz v. U.S. that “the Fourth Amendment protects people, not places.”105 In a concurrence, Justice Harlan set forward a test, additional to trespass, to determine whether or not a Fourth Amendment “search” had occurred: Has the government infringed on an expectation of privacy that “society is prepared to recognize as ‘reasonable’”?106 This became known as the “reasonable expectation of privacy” test.

The Supreme Court has never formally recognized a reasonable expectation of privacy in public conduct. In the 1983 case of U.S. v. Knotts, the Supreme Court found that the use of technology to track a person’s public movements—movements otherwise visible to the naked eye—did not infringe a reasonable expectation of privacy.107 In U.S. v. Jones (2012), the Court reiterated that it had not “deviated from the understanding that mere visual observation does not constitute a search.”108

Nevertheless, in Jones, a “shadow majority” of five justices expressed a willingness to reevaluate the contours of the reasonable expectation of privacy test to encompass some forms of geolocation tracking of public movements.109 In later cases, the Supreme Court highlighted the transformational nature of 21st century surveillance technology—and rejected simplistic comparisons of modern technology to older policing practices. In Riley v. California (2014), for example, the Court ridiculed the government’s contention that a search of an arrestee’s smartphone was “materially indistinguishable” from a search of a person’s pockets upon arrest. “That is like saying a ride on horseback is materially indistinguishable from a flight to the moon,” Justice Roberts wrote.110

Except for forensic analysis of latent fingerprints and DNA, law enforcement collection of biometric information has typically required a physical search or handling of a suspect—e.g., reaching into their mouth for a buccal swab, or rolling their fingers on an inkpad. The physical nature of these searches or seizures may seem like a small detail, but it has major consequences for the Fourth Amendment: Namely, it means that judges have felt comfortable regulating that conduct under the Fourth Amendment.111

Face recognition changes the equation by allowing tracking and identification outside of a traditional Fourth Amendment search or seizure. The Pinellas County Sheriff’s Office’s use policy for mobile biometric identification (Figure 8 below112) illustrates this powerfully.

PCSO bars officers from physically detaining individuals, and stresses that the absence of consent should not preclude officers from taking a photograph in a public place. Rather, if someone is in public, officers are encouraged to photograph that person and use biometric identification “whenever practical.”113

In this respect, face recognition is not alone—geolocation tracking via cell-site location information, automated license plate readers (ALPRs), and drones also allow tracking through non-invasive observation. Thus, as Sidebar 3 suggests, all of these tracking technologies would seem to fall into a constitutional grey area.114

And yet a growing number of state supreme courts and lower federal courts are interpreting the Fourth Amendment to limit public surveillance. This is clearest with geolocation tracking. Federal district courts in California and New York have found that individuals do have a reasonable expectation of privacy in the extended records of their movements revealed by cell-site location information—and that the Fourth Amendment requires police to get a warrant to obtain this information.115 The highest courts of Massachusetts and New Jersey have done the same, although each state reached this conclusion by interpreting their state constitutions, rather than the Fourth Amendment.116 In these cases, the courts recognized that dragnet-style surveillance raises serious and novel privacy concerns—and that those concerns are not extinguished by the fact that the behavior tracked occurs in public.117

Number of states that regulate police use of…

Not a single state has passed a law that places comprehensive limits on law enforcement use of face recognition technology. Five states have passed laws that limit some discrete aspect of police face recognition use.

Given their limited scope, none of these laws provide the range of protections afforded by most state laws governing geolocation tracking, drones, or automated license plate readers.

Apart from regulating police face recognition systems, seven states directly or indirectly curb law enforcement access to state department of motor vehicle face recognition systems, which are typically designed to detect identity fraud. Maine, Missouri, New Hampshire and Vermont have blanket bans on their DMVs using biometric technology or collecting biometric data.127 Washington stipulates that the DMV can use biometric technology only to verify the identity of a license or ID card holder.128

The few, discrete protections that these laws do provide may be easily evaded. Vermont law, for example, expressly prohibits its Department of Motor Vehicles from implementing “any procedures or processes for identifying applicants for licenses, learner permits, or non-driver identification cards that involve the use of biometric identifiers.”131 Somehow, however, Vermont has interpreted this provision to allow the FBI to request—and obtain—face recognition searches of 1.8 million Vermont driver’s license and ID photos.132 Given that they do not directly constrain law enforcement, other states’ DMV provisions could be read in a similarly narrow manner.

The Department of Justice’s announcement illustrates an important and often overlooked principle: Law enforcement agencies are free to voluntarily adopt restrictions on tracking technology that go above and beyond their view of what current statutes or case law requires.

While some agencies have exercised that authority, a surprising number of police departments appear to have not taken basic steps to limit use of face recognition. We can evaluate these agencies on three simple metrics:

a. A surprising number of agencies have not adopted use policies.

Of 52 agencies, at least 24 either did not provide a face recognition use policy in response to our document requests, or were clearly covered by another agency’s use policy.136 At least five of those agencies—the Daytona Beach Police Department, the Jacksonville Sheriff’s Office, the Nebraska State Patrol, the Kansas City Police Department (former program), and the Iowa Department of Public Safety—expressly acknowledged that they did not have a use policy (or, in the case of Iowa, a “finalized” use policy) for law enforcement face recognition.137

b. A minority of agencies clearly require individualized suspicion prior to search.

The agencies did, however, impose different kinds of legal restrictions that do not require judicial approval. Some agencies require officers to have an individualized suspicion that the individual whose photo is being submitted for a search be involved in a crime, but they vary in the degree of suspicion required. The agencies may require that officers have probable cause to believe that the individual search for was involved in a crime, or the agencies may merely require that an officer have reasonable suspicion to that effect.

Other agencies do not require any degree of individualized suspicion and instead only stipulate that face recognition searches must be conducted for criminal justice or law enforcement purposes. In these jurisdictions, anyone’s face can be searched in their face recognition database, so long as this is done in furtherance of a law enforcement mission.

Overall, of the 52 agencies, plus the FBI face recognition unit (FACE Services), we were able to determine the legal standard that applied to face recognition for only 24 of them, plus the FBI. Of those agencies, three required probable cause, and 10 required reasonable suspicion. The remainder either required a criminal justice purpose or provided no documentation to suggest a legal standard of any kind. Putting it differently, only 13 of 52 agencies (25%) clearly required any degree of individualized suspicion (e.g. reasonable suspicion or probable cause) prior to a face recognition search. 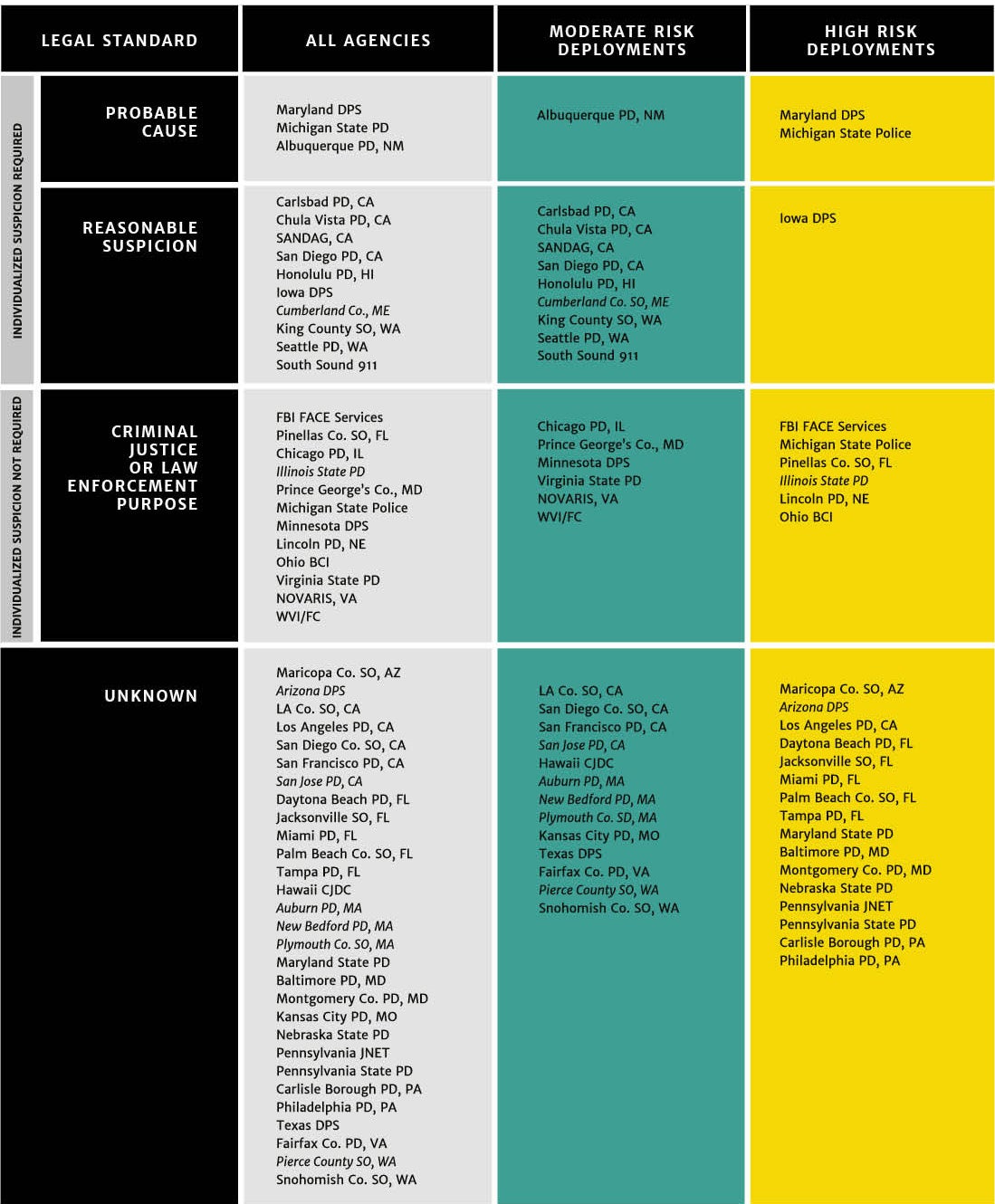 The absence of an individualized suspicion requirement means that face recognition may be used on effectively anyone—e.g., a pedestrian anywhere near a crime—so long as some criminal justice purpose can be cited for the search. At least three agencies—including the FBI face recognition unit (FACE Services)—expressly allow face recognition searches to identify witnesses to a crime, not just criminal suspects.139

c. Only one agency limits face recognition use to certain crimes.

There are echoes of this trend in modern law enforcement biometrics. Jurisdictions may search the FBI face recognition database (NGI-IPS) for investigations of any crime—regardless of the nature or the severity of the offense.141 But in order to be enrolled in that database’s “unsolved photo file”—a photo file of unidentified individuals that is compared to every new photo enrolled in the database—a photograph must pertain to an investigation of a felony offense for criminal homicide, forcible rape, robbery, or aggravated assault.142

Likewise, in Maryland v. King, the Supreme Court upheld a Maryland law requiring the collection of DNA from all individuals charged with violent crimes, burglary, or attempted burglary, and the search of their DNA against the federal DNA database, which includes forensic DNA samples from unsolved crimes.143 In upholding that program and differentiating it from a generalized search, however, the Court cited the “fundamental” distinction that Maryland’s DNA searches were limited to individuals arrested, detained, and charged with a serious criminal offense.144

None of the 52 responsive agencies clearly restricted face recognition use to more serious crimes. Only one, the Nebraska State Patrol, limited its use to a certain kind of offense—identity theft.145