Neil Stammer was a fugitive wanted for child abuse and kidnapping who had evaded capture for 14 years after failing to show up for his arraignment. Then, in 2014, a State Department official with the Diplomatic Security Service ran the FBI’s wanted posters through a database designed to detect passport fraud—and got a hit for Kevin Hodges, an American living in Nepal. It was Stammer, who’d been living in Nepal for years under a pseudonym. He was arrested and returned to the United States to face charges.56

The year before Stammer was caught, on the other side of the world, the Los Angeles Police Department announced the installation of 16 new surveillance cameras in “undisclosed locations” across the San Fernando Valley. The cameras were mobile, wireless, and programmed to support face recognition “at distances of up to 600 feet.”57 LA Weekly reported that they fed into the LAPD’s Real-time Analysis and Critical Response Center, which would scan the faces in the feed against “hot lists” of wanted criminals or “documented” gang members.58 It appears that every person who walks by those cameras has her face searched in this way.

What agencies are using face recognition for law enforcement, how often are they using it, and how risky are those deployments?

When proponents of face recognition answer these questions, they often cite cases like Neil Stammer’s: A felon, long-wanted for serious crimes, is finally brought to justice through the last-resort use of face recognition by a sophisticated federal law enforcement agency.59 The LAPD’s system suggests a more sobering reality: Police and the FBI use face recognition for routine, day-to-day law enforcement. And state and local police, not the FBI, are leading the way towards the most advanced—and highest risk—deployments.

1. How many law enforcement agencies use face recognition?

We estimate that more than one in four of all American state and local law enforcement agencies can run face recognition searches of their own databases, run those searches on another agency’s face recognition system, or have the option to access such a system.60

Some of the longest-running and largest systems are found at the state and local level. The Pinellas County Sheriff’s Office in Florida, for example, began implementing its current system in 2001.61 Over 5,300 officials from 242 federal, state, and local agencies have access to the system.62 In Pennsylvania, officials from over 500 agencies already use the state’s face recognition system, which is open to all 1,020 law enforcement agencies in the state.63

Many federal agencies access state face recognition systems. While the GAO reports that the FBI face recognition unit (FACE Services) searches 16 state driver’s license databases,64 this is not a complete picture of the FBI’s reach into state systems: We found that, after undergoing training, FBI agents in Florida field offices have direct access to the Pinellas County Sheriff’s Office system, which can run searches against all of Florida driver’s license photos. Notably, the GAO does not identify Florida as forming part of the FACE Services network.65 It is possible that other field offices can access other state systems, such as those in Pennsylvania and Maryland.66

The Department of Defense, the Drug Enforcement Administration, Immigrations and Customs Enforcement, the Internal Revenue Service, the Social Security Administration, the U.S. Air Force Office of Special Investigations, and the U.S. Marshals Service have all had access to one or more state or local face recognition systems.67

2. How often do law enforcement agencies use face recognition?

In its first eight months of operation, Ohio’s system was used 6,618 times by 504 agencies, though its usage rate has since gone down—for the first four months of 2016, the system was searched 1,429 times by 104 different agencies.70 San Diego agencies run an average of around 560 searches of the San Diego Association of Government’s system each month.71 Pinellas County’s system may be the most widely used; its users conduct around 8,000 searches per month.72 This appears to be much more frequent than the searches run by the FBI face recognition unit—almost twice as often, on average.73

We have only a partial sense of how effective these searches are. There are no public statistics on the success rate of state face recognition systems. We do know the number of FBI searches that yielded likely candidates—although we do not know how many actual identifications resulted from those potential matches. The statistics are nonetheless striking: Of the FBI’s 36,420 searches of state license photo and mug shot databases, only 210 (0.6%) yielded likely candidates for further investigations. Overall, 8,590 (4%) of the FBI’s 214,920 searches yielded likely matches.74

3. How risky are those deployments?

We found that a large number of police departments are engaging in high risk deployments, and that several of the agencies are actively exploring real-time video surveillance.

None of the agencies indicated that its mug shot database was limited to individuals arrested for felonies or other serious crimes. Only one agency, the Michigan State Police, deleted mug shots of individuals who are not charged or found innocent.76 The norm, rather, is reflected in an agency like the Pinellas County Sheriff’s Office. Its mug shot database is not scrubbed to eliminate cases that did not result in conviction. To be removed from the database, individuals need to obtain an expungement order—a process that can take months to be resolved.77

High risk deployments—whether Stop and Identify, Arrest and Identify, or Investigate and Identify—are typified by their access to state driver’s license and ID photo databases. Our requests revealed 19 state or local law enforcement agencies in eight states allow face recognition searches of these databases. Combining that with recent information from the GAO, and earlier reporting that we verified against the GAO report or through our own research, we identified 26 states that enroll their residents in a virtual line-up.78

The figure is likely larger than that. In 2013, the Washington Post and the Cincinnati Enquirer conducted similar surveys that flagged four other states—Indiana, Massachusetts, Mississippi and South Dakota—that allowed access but that we were not able to verify.81 If all four of those states continue to grant access, the total number of licensed drivers in face recognition networks would increase to 131,211,203, of whom 129,280,396 were adults.82 That comes out to 53% of the adult population.83 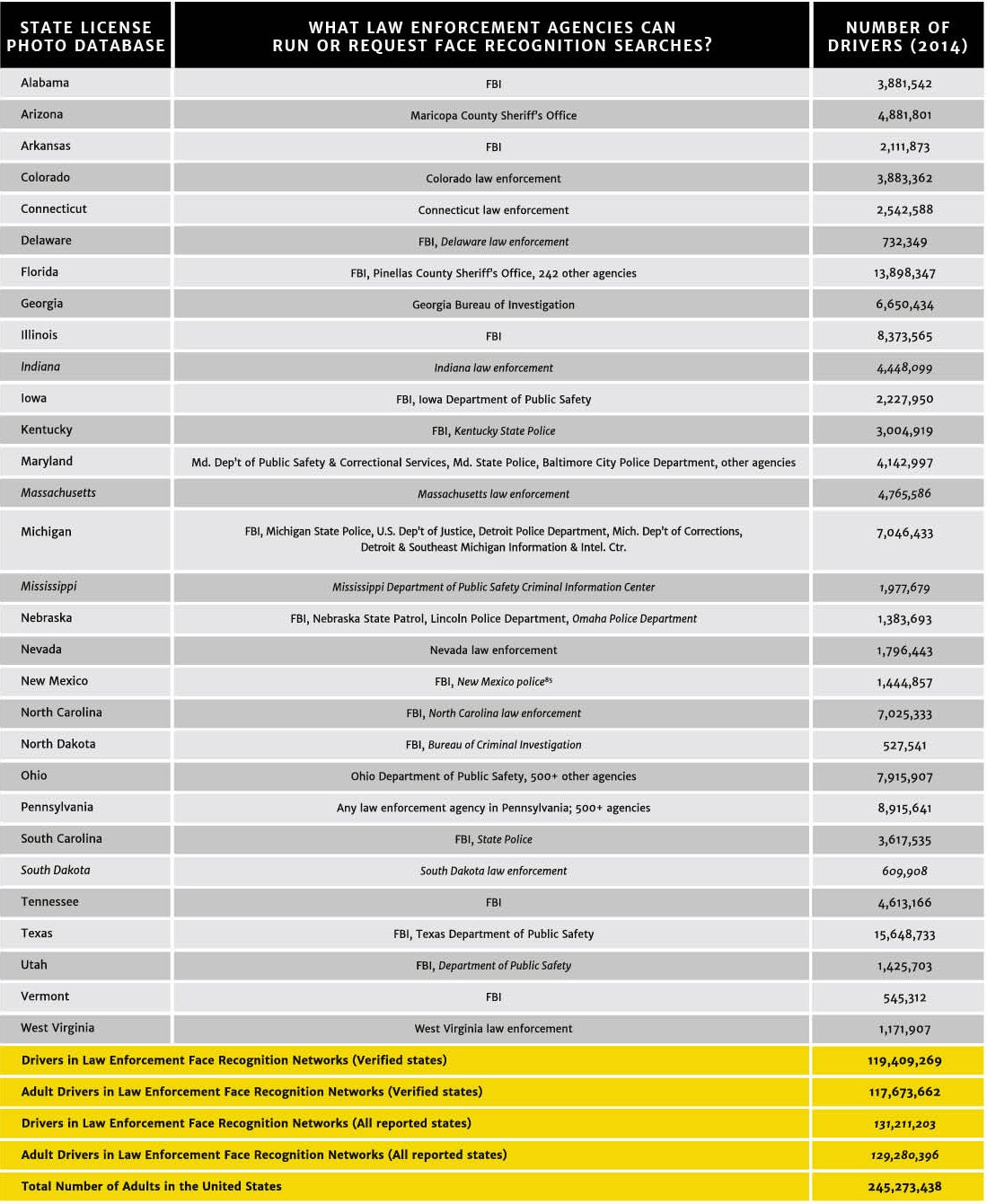 Note: States and agencies reported to allow or run searches of license and ID photos are in italics.84This is not an exhaustive accounting of law enforcement access to driver’s license photo databases. Other states may allow this access that were not identified in our research.

In May 2016, one of the world’s leading face recognition companies reportedly entered into an agreement with the city government of Moscow, Russia. The company, called N-Tech.Lab, would test their software on footage from Moscow’s CCTV cameras. “People who pass by the cameras are verified against the connected database of criminals or missing persons,” the company’s founder said. “If the system signals a high level of likeness, a warning is sent to a police officer near the location.” Following the trial, the company will reportedly install its software on Moscow’s CCTV system. The city has over 100,000 surveillance cameras.86

Is real-time video surveillance like that seen in Moscow coming to major American cities? The answer to this question is likely “yes.”

In the U.S., no police department other than the LAPD openly claims to use real-time face recognition. But our review of contract documents and other reports suggests that at least four other major police departments have bought or expressed plans to buy real-time systems.

This means that five major American police departments either claim to use real-time video surveillance, have bought the necessary hardware and software, or have expressed a written interest in buying it. 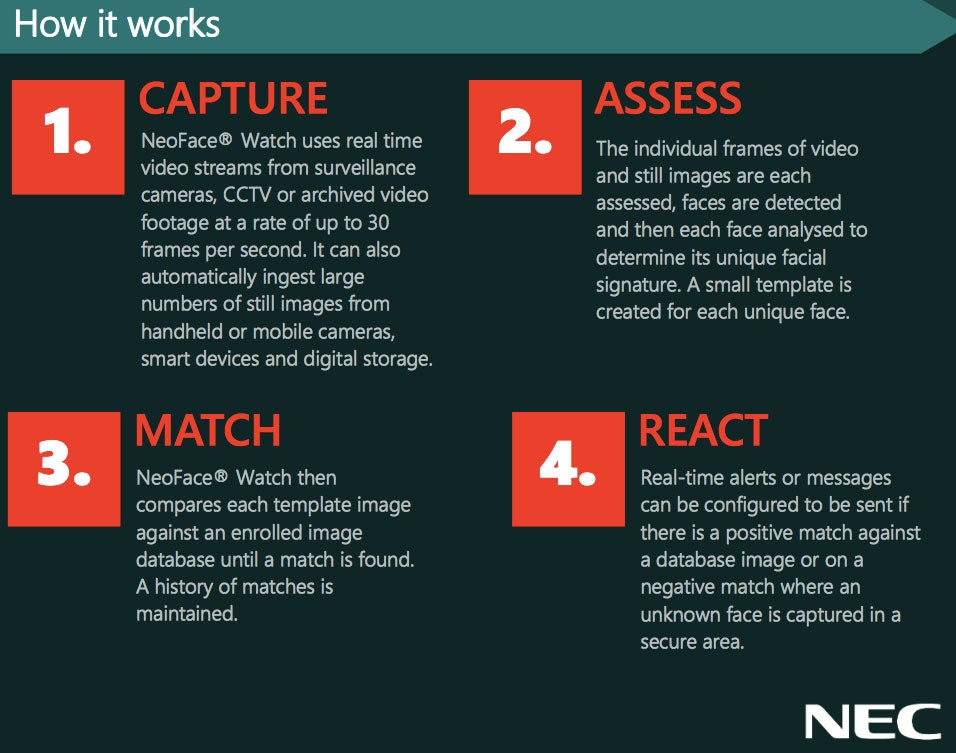 The proliferation of police body-worn cameras presents another opportunity for real-time face recognition. Rick Smith, the CEO of Taser, the leading manufacturer of body cameras, recently told Bloomberg Businessweek that he expects real-time face recognition off of live streams from body cameras to eventually become a reality.99 In a recent interview with Vocativ, the director of the West Virginia Intelligence Fusion Center, Thomas Kirk, had a similar vision: “Everyone refers to the Minority Report… about how they use facial recognition and iris recognition. I actually think that that is the way of the future.”100

We anticipate that real-time face recognition systems will become commonplace.

Researchers and industry experts we interviewed agreed that real-time face recognition is becoming technologically feasible, but that computational limitations, video quality, and poor camera angles constrain its effectiveness and sharply limit its accuracy. NIST is currently running the first ever test for face recognition in video, which should shed light on the accuracy and performance of these algorithms in real-time.101

Real-time video surveillance appears to be a simple question of supply and demand. As the technology improves, we anticipate that real-time face recognition systems will become commonplace.

We developed two scores to measure the risk level of an agency’s deployment. The first focuses on the main differentiator between moderate and high risk systems—the people enrolled in the system’s face recognition database. The second focuses on how the agency has addressed real-time or historical video surveillance.

People in the Database. Who is enrolled in the face recognition database or network of databases available to the law enforcement agency?

Real-Time Video Surveillance. How has the agency addressed the risks of real-time or historical video surveillance?